Any building that has lasted almost a century is sure to have gone through renovations and reconfigurations of the space over the years. In the case of Sacred Heart, which first opened its doors on Sheridan Road to students in 1929, the school has seen that and more. Its fascinating history includes the housing of cloistered nuns who taught at Sacred Heart and a nighttime fire in the 1980s which ended up being confined to what was then the cafeteria. Even a fire couldn't destroy this well-built structure.

In 1927, having outgrown the twin houses on Pine Grove Avenue in Chicago's Lakeview neighborhood that were home to the Academy, the Religious of the Sacred Heart (RSCJ) decided to construct a new school building at 6250 N. Sheridan Rd. The original structure (see photo above) didn't yet have, of course, the additions of the Rosemont Building and the Campbell Gymnasium (both built in the 1960s), and the 5th grade wing which contains the Cole Masterpiece Room (completed in 2015).

What this newly built school did offer was a solid foundation and an expanded space that could accommodate growing enrollment. It also provided a bit of room for the Religious, who were cloistered at that time, to have housing (RSCJ nuns could teach students but didn't go beyond the school building itself). According to Jane Steinfels ASH'92, Sacred Heart's Archivist and Campus Minister, what is now the Lower School STEAM Lab served as the residence for senior RSCJ leadership; the younger nuns slept in their classrooms. In the late 1960s, however, the Superior General of the RSCJs, the Very Revered Mother Sabine de Valon, mandated that a convent be built (today the former convent, the Rosemont Building, houses offices and a few classrooms). 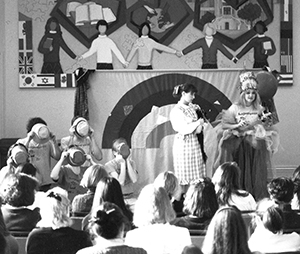 When the school first opened in 1929, a few boys were among the student body mostly made up of girls. It offered 1st through 12th grade studies; the boys usually went to other schools after about 3rd grade. In 1935, however, Hardey Preparatory School for Boys was officially opened and had its classrooms on the third floor of 6250. The concept of a coed campus wasn't embraced until decades later; at the time of Hardey's founding and for many years, boys and girls didn't have any academic or social activities together. When the Conway house (now known as the Driehaus Center) was purchased in 1959, Hardey classes were taught there, freeing up more space in the 6250 building.

The chapel in the main school was built as a sacred space (photo below), then became a library in the 1970s (photo left is of a play held in the library), then was converted back again to a chapel in the early 2000s. The renovation of the chapel was completed in 2004 and, today, is a much-loved space for smaller masses and gatherings. Interestingly, the Stations of the Cross, which grace the chapel's side walls, were painted by Jane Steinfels' grandfather, Melville Steinfels, who specialized in liturgical art. Other pieces in the chapel date from the 1940s—the Mary and Joseph statuary and the ornate Paschal candle holder, for example.

Throughout its long life, the school building has seen art displayed, talks given, concerts played, reunions held; it has inspired great learning and held prayers aloft. And it has provided a safe space in which values could be formed and put into practice. None of this would be possible, of course, without the loving Sacred Heart community to make it so. For generations, students and alumni have considered Sacred Heart at 6250 N. Sheridan Rd. to be their home. They have a fondness for their teachers, one another, and for the building itself—the elegantly curved exterior staircase, the beautiful lattice-work windows in the portry and school, and the traditionally designed yet adaptable space. It has indeed been a home since 1929, where dreams have been formed by the students of yesteryear and are still being shaped today. 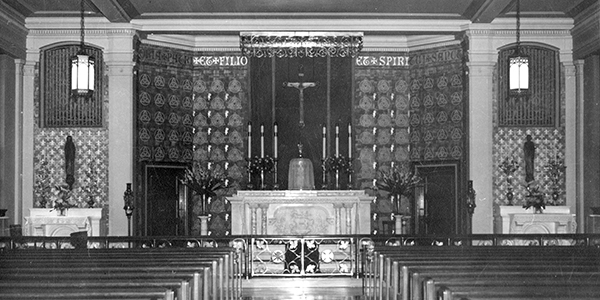